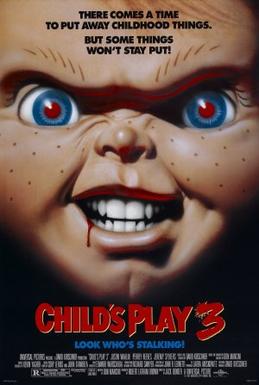 I enjoyed this movie. Chucky was great in it. From his rude mouth too his rage and then killing people. Speaking of killing people

There were 8 kills in child’s play 3. My least favourite kill was this man who got shot off screen. You see him dead later (LAME.) My favourite kill is the barber. He gets his throat slit and blood everywhere. It was a great movie. It wasn’t as good as the other ones I watched but i’ll cover them soon. This movie was when chucky started with his jokes and his smart mouth. But wait until you see Bride Of Chucky and Seed Of Chucky (especially Seed Of Chucky) they are bonkers. But I will cover them soon. Then I liked how they made Curse Of Chucky which was a very gorey (scary for once) movie. And I liked how they made it after Seed Of Chucky, the funniest movie that slasher chucky fans hated. I will review curse of chucky as well. I haven’t watched Cult Of Chucky or Child’s play 2019 Reboot but when I do i’ll write about them. I’m also going to watch a lot of horror movies like Pet Sematary, Gremlins, and The Shining (maybe…) so when I eventually watch those movies i’ll review them (well i’m reviewing every horror movie i’ve seen)