So I’m gonna do a top 15 favourite movies list but I can guarantee they are gonna change. But this is my top 15 movies at the moment ranked from Best to BESTEST

I don’t think I have EVER heard ANYONE say oh Keanu is one of my favourite movies. But it’s just so fun. It’s a comedy action and there are so many awesome battles. It’s about 2 friends who are in.. I don’t know about late 30s? And one of them gets a cat and names him Keanu and then he gets robbed by a gangster gang and they steal his cat. So they pretend to be gangsters to get him back and in the last act there are SO many awesome battles and when you watch it for the first time it’s SUPER fun.

This movie is awesome. It’s the start to the journey and it’s just really fun to watch. It’s got loads of fun stuff in it like the end battle and Thanos is my favourite Marvel character and I KNOW people hate to see the bad guys win but since it’s Thanos that was pretty awesome

This movie is so cool. It’s long, it’s epic and it has like some sort of time travel-thing and it goes BACK to loads of other Marvel movies like 2012 The Avengers and 2014 Guardians Of The Galaxy. It’s also got Thor as a fat guy and that was super funny. And I loved seeing Korg. If you don’t know who Korg is, watch Thor: Ragnarok. And the end battle is one of the greatest battles in a movie I’ve EVER SEEN

This is an EMINEM movie and of course Eminem is my favourite rapper so a movie about him would be really great. I just love this WHOLE movie. I watched it twice in 2 days. Yeah, I really love this movie. My favorite part is the rap battles and the whole 313 Vs. The Free World theme

I couldn’t NOT put this on my list because it’s just so classic. One of the first horror movies I saw. It’s got a real awesome soundtrack and it’s just the original classic but let me tell you something (It’s not the best Chucky movie       DUN DUN DUN)

This movie is awesome. It’s got awesome jump scares. As much as Pennywise is my favourite character in the film, I really like The Losers Club storyline. And it’s just a well done film. It’s actually not as scary as people say it is. Yeah definitely one of my favourite movies. But I think I’ve watched it a little too much so it’s not in my top 5. But IT WAS.

9. Star Wars: The Empire Strikes Back 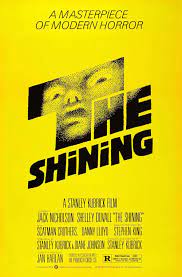 I had to include this movie. It’s so classic it’s so fun it’s awesome. It’s amazingly creepy, the camera is AWESOME and Jack Nicholson is SO creepy. I know he’s not a horror actor but whenever I see him somewhere else in another movie that’s not a horror film he still looks creepy.

This movie is just awesome. It’s got such a good plot. It is an amazing comedy-horror movie and the thing is Seed Of Chucky goes way too far with the weird comedy but this is the perfect amount of comedy for a Chucky movie. And the KILLS are AWESOME! I love how Chucky and Tiffany kill people and then the other people get accused of killing those people. It’s just such a fun watch.

This movie is probably the most funny movie I’ve ever seen. It’s just so amazing, funny and just a fun watch. It’s a movie I can’t get sick of. I love the Terence and Phillip movie. It’s just so funny. And the songs are annoying but HILARIOUS!!! Just SO fun

This movie is SO awesome. Not gonna lie I liked it more when I first watched it but I LOVE THIS MOVIE SO MUCH. Just the storyline is awesome, It’s just got so many awesome things/

I just HAD to put this on the list. It’s so fun it’s just a great watch. The leeches, the train scene, Lardass there’s SO many great things about this movie. I like the whole story and I’ve always loved this movie and I really want to read the book.

Okay so this is my favourite Horror movie. It’s just so brilliant. It’s creepy how you feel like you’re in Paul Sheldon’s shoes and it’s just a brilliant watch. I don’t know why in my review I gave it a 7.5 I guess my opinion changed. It’s a 10 out of 10. And it’s got really good acting (especially Annie Wills) Yeah just a PERFECT movie.

This was my favourite movie. But now it’s my second. It’s SO fun. It’s so funny. My favourite parts are definitely when they stay at the cousins house. It’s just got so many funny moments. And of course Aunt Edna is the best part of this movie. It’s just a 10.5 out of 10. Beyond Perfect but there is a movie that’s better