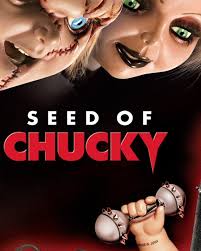 I really liked this movie. I know most people hate it because it’s funny and all weird with chucky and Tiffany finding their son or girl they don’t know if he’s a girl or a boy. But I like it because I love horror but I also LOVE comedy. So comedy horror is just 2 of my favourite movie genres in one movie. I thought lot’s of the movie was really cringy like Jennifer tilly pla ying herself dating the rapper RedMan. And also one thing that is SO funny is that there kids name was Sh*t face until they name him glender. (which I think is worse than Sh*t face) and I also think the running joke on whether glender is male or female is actually pretty funny.

14 people die in this movie. My favourite kill is the film producer Tony Gardner playing himself. He gets decapitated with such a  gorey kill. My least favourite kill is the 3 people who fall out of the closet dead (off screen BS). I know that’s 3 people but I don’t care at all. Thanks for looking at my recap of Seed Of Chucky. Curse of chucky is my next one to look at. So hope your looking forward to it